Adopted from misfiled reports by and about Crown Prince Rudolph

Otto trailed after Rudolph along the precarious roof of the Hofburg. “Why are you so very sure my kindred Franz Ferdinand will be the heir apparent?”

“‘Apparently’ being the key word” Rudolph said as he circled around a massive chimney. “But don’t tell the poor boy that. He is scared enough of the idea as it is.”

“You see both your death and Franz’s death?” Otto said. “What about me?”

Rudolph looked at Otto for a moment. “I never see anything except the here and now about you Otto. Perhaps it is because only you live in the here and now. I don’t know.”

Otto walked with Rudolph across the roof of the Hofburg Palace. “There is something you should know about that coffin” Otto said. “What everyone omits is one tiny little detail: I could not jump over the coffin because my horse point blank refused.”

Rudolph paused and looked at Otto from over the tops of his dark glasses. “Did the other riders successfully jump over the coffin?”

“Yes” Otto admitted. “But my horse balked. And I am a damn good rider! It was my bet in fact! The villagers saw us coming and set down the coffin in the road. It was a piece of cake. Even Crazy Sisi could have jumped it. It was nothing at all. Technically speaking that is. Bad taste. Sure. Bad taste is my speciality. But my horse point blank balked.”

“What color was your horse Otto?” Rudolph asked softly.

“White” Otto replied. “Pure white.” He looked quietly at Rudolph who sighed and pulled off his brigadier cap to rub his forehead.

“Was your horse a Lipizaner? Lipizaners are technically not white horses.”

“No. It was a pure white horse” Otto said.

“Damn!” Rudolph said as he rubbed his forehead.

“The joke was on me eh? That coffin held a vampire didn’t it?” Otto said.

Rudolph nodded. “Yeah! The joke is on you Otto!”

Rudolph did research and then he let Otto lead him to the distant graveyard where the coffin containing the mother of the village elder was buried. Both men rode horses. Otto rode his pure white horse. It was dusk. The graveyard was empty. Rudolph nodded and Otto tried to ride his horse over the grave. The pure white horse balked even when whipped. Then Otto got off his horse and tried to drag the horse across the grave. The white horse reared up and fought Otto as its hoofs tore at the dirt which edged the grave. The horse was obviously instinctively terrified. “Ok Otto. Give up” Rudolph said. Otto led the horse back and patted it as the pure white horse trembled with fear. Rudolph jumped off his horse and knelt down by the fresh grave. He dug among the withered flowers and felt around the jumbled dirt. Then Rudolph stood up. “The earth has been disturbed repeatedly” Rudolph said. Either animals have been burling down or something has been digging itself up and out!”

“Oh fuck!” Otto said. “If we were accused of being godless for jumping over the damn coffin then just wait until we vandalize the damn grave to disinter a suspected vampire!” At that moment another rider rode up. “I am innocent!” Otto cried out. “Fuck! I am never innocent! But right now I have not done anything wrong —- for once! And I never thought I would be saying this!”

Countess Dagmar rode up on her pure white horse. Then she used her riding whip to salute Rudolph who then introduced her to Otto. “Countess Dagmar. Agent of the Order of the Dragon. Solomonari Licenced Dhampir and Certified Slayer. Meet my black sheep of a fellow Habsburg Archduke Otto!” Rudolph said.

“So this is the grave of a suspected Vampire?” the Slayer said as she also tried to force her pure white horse over the suspect grave. Her horse also refused to touch the suspected site.

“The earth as been repeatedly disturbed” Rudolph said as he held her horse as she inspected the site. She looked around. Dusk was fading. She knelt down with her bag of tools and then she deftly used a small shovel to burl. “Right. Otto. Dig!”

“What? Me? That is genuine hard labor!”

“Otto!” Rudolph bellowed. “Dig!” So Otto grabbed the shovel and pulled out its full length of handle and dug. After some half an hour of huffing and puffing the Archduke who never ever in his entire life ever engaged in constructive labor finally reached the coffin. When the shovel hit the hard surface the Slayer gestured and Otto jumped up out of the grave. The Slayer grabbed an iron stake and jumped down and drove the stake straight down into the grave. Then she used an axe to shatter the top of the wooden coffin revealing nothing inside except the stake. She studied the emptiness with a professional eye.

“No net of seeds or iron or cross or hawthorn or garlic or salt or anything” Rudolph said. “Why?”

“One: they did not suspect. Or two: they knew!” Countess Dagmar replied. She tossed salt and iron shavings and then placed a cross inside the empty grave. Then she jumped up and gestured and Otto groaned and re-buried the coffin with the iron spike still impaling it. He jumped up and down on the earth and then kicked withered flowers about the surface as the Slayer picked up her bag and slung it from her saddle. Then Rudolph pulled out his dossier.

“The grave is the mother of the village elder” Rudolph said as he read the dossier with his reading glasses. “The Gulders. The Goldens being the translation. The dominant clan in these area for hundreds of years. They own most everything of value. Everyone is either beholden to them or owned by them or scared of them. They are the tax collectors as well. The church is chummy with them. They keep their hands in each other’s pockets and hide each other’s sins. The funny thing is the mater is always named Goldie. Apparently the family looks are very dominant from generation to generation. The mater or matriarch I mean. The Goldies. They all seem to look alike. The daughters- in- law live in terror of their mother -in law.

The daughters-in-law never live beyond thirty. They died of ‘consumption’ or ‘anaemia’ or else childbirth. You could say the Gulders have a continuous infusion of new blood into the family. Census records and marriage records indicate as many a three or four wives or even five wives per son. Lots of dowries come in. All of the brothers always live under the same roof. Few or no daughters. The daughters always seem to die young. Very young. Every sort of death but statistically speaking the female Gulders are peculiarly graced with death excluding the matriarchs who always look remarkably alike and are always named ‘Goldie’ and the sons who as peculiarly statistically well endowed as well. Very peculiar!”

“Why am I not going to be happy with the end of this debriefing?” Otto asked.

“Because the end of his debriefing means your childish prank of jumping over a peasant’s coffin means you have pissed off a vampire mater!” the Vampire Hunter told the resident Habsburg back sheep. “And you know what that means….”

Purchase the official eBook version of Book 5 on Amazon here 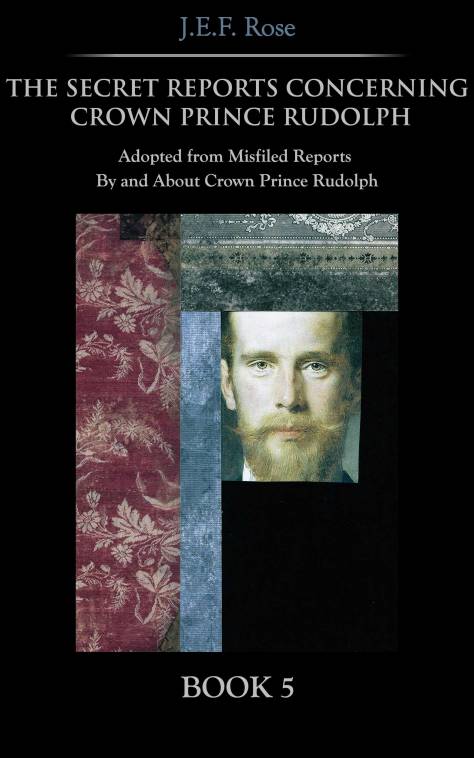